To work with PKU Office of Educational Administration and PKU Health Science Center News, PKU News set up a special column titled “Survey of National Teaching Achievement Award” to deliver the interviews of the seven awardee programs, so as to display PKU people’s spirit of remaining true to their original aspiration and keeping their mission firmly in mind, the love of and devotion to the teaching cause, the pursuit of academic rigor, learning, and reform and innovation. At the same time, the column shows PKU’s development in talents training and achievements in teaching reforms. 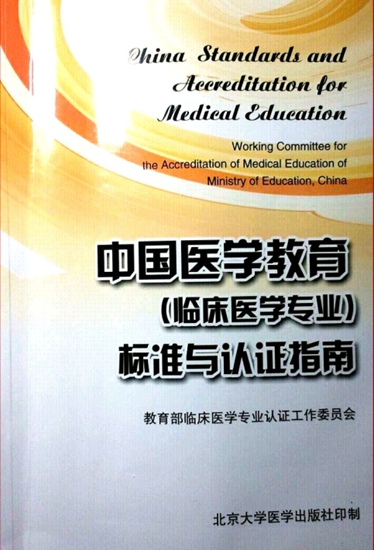 The 2008 edition of “Guideline for China Standards and

With the development of medical education, the original standards lagged behind in terms of ideas. The World Federation for Medical Education (WFME) made a new revision of its standards in 2012, which brought about both pressure and motivation for domestic medical educational professionals to keep up with the international pace. 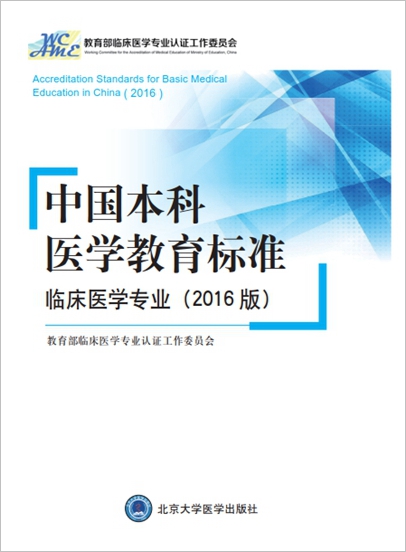 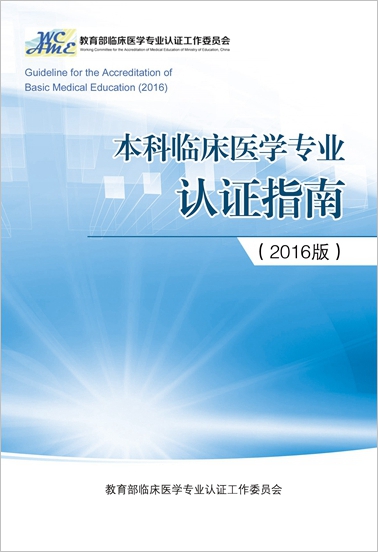 Guideline for the Accreditation of Basic Clinical Medical Education (2016)

The Joint Effort of Four Generations over Ten Years

During the ten years of the accreditation work, the Working Committee set up an expert pool of more than 200 domestic experts and over 20 international experts. For each on-the-spot inspection, experts with different disciplinary backgrounds such as clinical medicine, basic medicine, preventive medicine, medical education administration, pedagogy, humanities and social sciences, and medical ethics would be selected to constitute the inspection team.

Group photo of training and exchange of accreditation experts in 2018

Focusing on aspects such as the medical school’s training objectives, the curriculum, the educational resources, students, the faculty, educational administration and future development planning, the inspection team conducted the on-the-spot inspection and formed the accreditation report within two months after the inspection.

Yang Jinhua, one of accreditation experts and the former Executive Vice Dean of Shantou University Medical School, introduced, “The accreditation team would hold an inspection meeting on a daily basis and submit the feedback afterwards. People would often discuss heatedly. I remember that one meeting even lasted till three or four o’clock in the morning.” Although it was hard work, the accreditation yielded a feeling of achievement. “I’ve been doing just one thing in my life, which is medical education. The accreditation work has realized our dream of promoting the in-depth reform of China’s medical education.” Yang commented.

Altogether four generations of people have participated in the accreditation work, from students of 1990s to senior experts of over eighty years old. Accompanying the accreditation for clinical medicine for almost ten years, Yang Jinhua thought of himself benefited a lot. “I’ve been ‘learning from doing, and doing from learning’. However small a university is, it would have its own features. What I’ve loved most is to advocate and promote the good ways that have been found during the accreditation. Learning from experience from various schools have enabled Shantou University Medical School to better itself.” 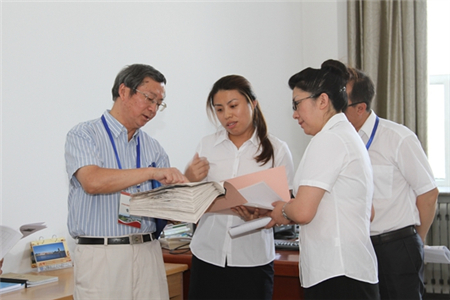 In some of the medical universities and colleges, there was the problem of blind enrollment expansion. Therefore the limited teaching resources were unable to guarantee the teaching quality, which not only harmed students’ benefits, but constituted a resource waste for the society. There was one medical university that had an enrollment size of 1200 students. “Then we discussed and asked the university how they conducted the anatomy class and whether they had enough body donors. If learning was only made through observation and video watching, how could they guarantee the teaching quality?” commented Wang Zhifeng, one of accreditation experts and professor from PKU School of Public Health. After the accreditation, the university reduced the enrollment to 600-800 students, which matched with its hardware conditions. 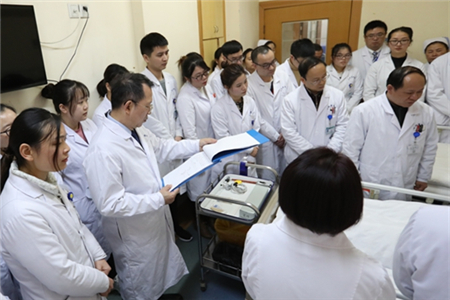 Experts’ on-the-spot inspection of the teaching ward-round at

the affiliated hospital of North Sichuan Medical College in 2018

Furthermore, for a medical university/college, one of the basic requirements is to have a third-grade class-A hospital directly affiliated to it. However most of the newly built medical universities and colleges were up to par. With the accreditation including that as one of the basic standards, some schools were pushed to negotiate with local departments of health and solved this difficult problem.

There are many similar examples such as clarifying training objectives, normalizing educational behavior, improving evaluation system, promoting educational reform, and exploring an administrative system conforming to medical schools. The accreditation has brought about real benefits for medical universities and colleges. 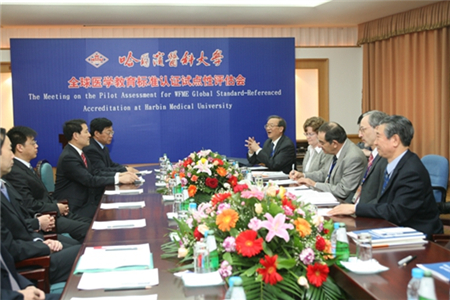 Just as Cao Depin, the former Vice President of Harbin Medical University, put it, “Through the accreditation, we further understood the idea and procedures of international accreditation for medical education. Our university benefited from the accreditation, which promoted the building and development of the university.” Harbin Medical University is the first domestic school to receive the pilot accreditation for WFME global standards for medical education and passed the second round of accreditation based on the new revision in November 2018. “Compared with the global standards, 2016 edition reflects the characteristics of Chinese medical universities and colleges, such as internship when at school, the set-up of ideological and political courses and medical humanities courses, enhancing experiment teaching and the feedback of graduates’ qualities and so on.”

Acknowledging the Gap, Respecting Autonomy in Running the School

Through the accreditation, the MOE drafted and published the first educational standards and guideline in China’s modern history of medical education—“ China Guideline for the Accreditation of Basic Clinical Medical Education ”, and revised and published the “ Standards for Basic Medical Education in China: Clinical Medicine (2016) ”. The 2016 edition of standards reflects international trends of medical education, domestic status quo and social anticipation, which provides a basis and guidance for the running of clinical medical education.

Cheng Boji, Secretary-General of the Working Committee, emphasized, “The accreditation of clinical medical education does not pursue a unified model, but instead decides if the school can meet the basic requirements while respecting the school’s autonomy of running.” On this basis, the medical universities and colleges can have enough space and freedom to show their own characteristics. 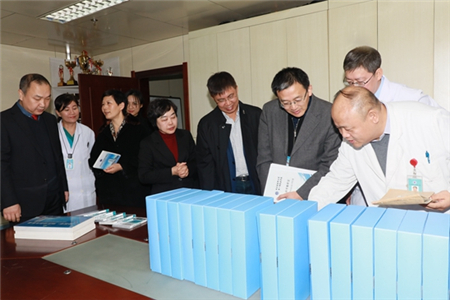 Experts’ on-the-spot inspection for the second round of

accreditation at Harbin Medical University in 2018

The accreditation has always been carried out with a view to the sustained improvement rather than the competition for ranking. “In the precondition of complying with the law of medical educational development, schools should measure themselves with their own rulers. For example, PKUHSC and Weifang Medical University are totally not comparable. What we want to see is if a school can meet its own goal, and if it complies with basic standards or development standards.” Explained Wang Weimin, Deputy Secretary-General of the Working Committee.

David Gordon, President of WFME, visited the Secretariat of the Working Committee

and met with Lin Huiqing, Vice Minister of Education in 2018

Up till now, all the medical universities and colleges that have passed China’s accreditation of clinical medical education are marked in the World Directory of Medical Schools, which becomes an important standard for graduates to practice medicine internationally.

From its launching till now, China’s accreditation of clinical medical education has been receiving constant guidance and support from relevant administrative departments, and facilitating the implementation of the strategy of “Healthy China”, where PKU came in with its responsibility. “The government needed a third party to accomplish this, and the Secretariat established at PKUHSC played a very important role.” Commented Ke Yang, Vice Chairman of the Working Committee. 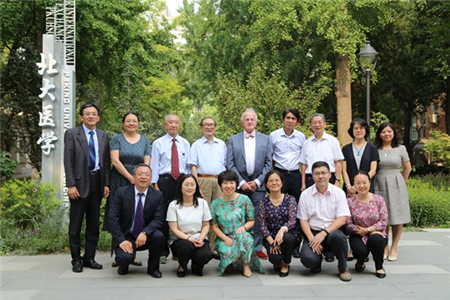 Note: The Secretariat of the Working Committee provided help with this article.