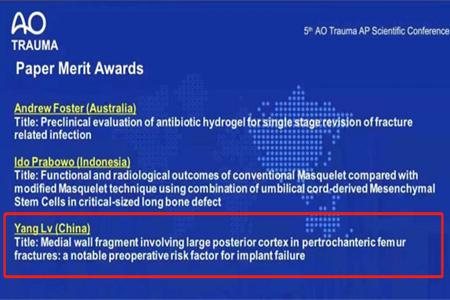 The AO Trauma AP Conference is hosted by the AO Trauma AP Regional Committee every two years. It is the top conference in the field of orthopedics in the Asia-Pacific region. A total of 18 countries and regions participated in this year’s conference and contributed more than 600 papers. After careful selection, a total of 60 papers entered the final. Dr. LV Yang made a special report on the topic of "Treatment Strategies for Intertrochanteric Fractures Combined with Internal and Posterior Fracture fragments", which triggered a heated discussion on the spot. Rated by judges from various countries on site, Dr. LV Yang stood out from many competitors and finally won the "Paper Merit Awards", becoming the only doctor in Chinese Mainland to win the award at the conference.