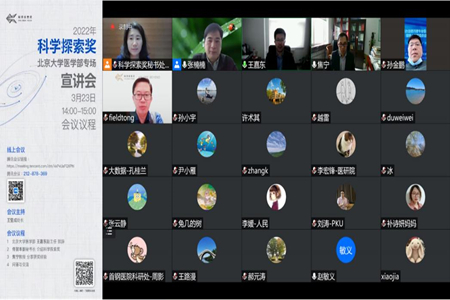 As one of the highest funding programs for young scientific and technological talents in China, "XPLORER PRIZE" is a public welfare award funded by Tencent Foundation and led by scientists. In 2022, the Prize covered medical science for the first time.

On March 23, the Secretariat of "XPLORER PRIZE" held a special lecture for PKU Medicine online, which was attended by more than 60 scientific researchers.

According to relevant guidelines, young scientific and technological talents under the age of 45, who have obtained a doctorate and work full-time in mainland China, Hong Kong and Macao, can apply on the official website of "XPLORER PRIZE"（https://www.xplorerprize.org）. The application deadline of this year is April 15. After that, the prize committee will conduct independent evaluation. The list of winners is expected to be announced in September, 2022.