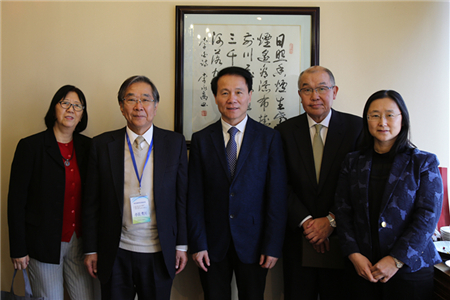 ZHAN Qimin introduced PKUHSC’s latest progress in talent training and scientific research to Ogawa Hideki and expressed the hope that the two universities would keep on carrying out multilevel and practical exchanges and cooperation so as to jointly promote the development of medical education both in Japan and China. Ogawa Hideki reviewed the exchange history between the two universities and hoped that the two would continue to strengthen exchanges, deepen cooperation, complement each other and achieve common development, thus making greater contribution to the progress of human health. In addition, the two sides also discussed student exchange programs, appointment to visiting professors, and the joint seminar to be held at PKUHSC in 2018.

Juntendo University was established in 1838 and has a history of 180 years. Board Chairman of Juntendo University Ogawa Hideki was awarded the title of Honorary Professor of PKUHSC in 2015. Moreover, PKUHSC and Juntendo University have successfully held five symposiums in a row. The 6th session of the upcoming symposium to be held in Beijing bears the theme of cardiovascular diseases.