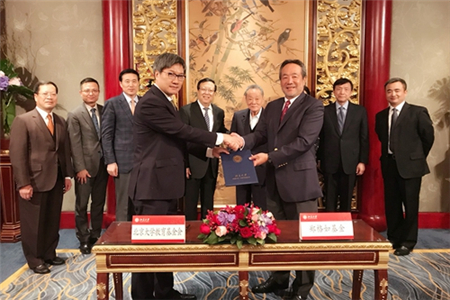 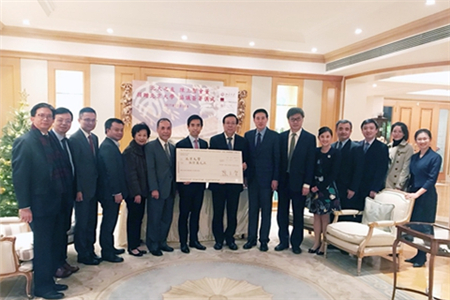 In order to help Peking University to grow into an internationally renowned first class university and promote the development of China's education, many entrepreneurs and friends from Hong Kong offered generous donations to PKU to fully support the development and construction of Peking University. Among them, Hong Kong Luen Thai Group Chairman Mr. CHEN Shouren donated the establishment of "PKUHSC CHEN Shouren Education Fund" to support research in the field of traditional Chinese medicine.

On December 19th, HAO Ping and his delegation attended the PKU New Year Exchange Meeting with "Thanksgiving, Sharing and Exchange" as its theme. More than 40 Hong Kong business elites came to the meeting. Four PKU experts respectively shared ideas about the meeting theme from different angles and communicated with the guests present at the meeting. LIU Yucun, vice chairman of the PKU Council and chairman of the PKUHSC Council, shared his overall understanding of health and introduced the comprehensive advantages and leading position of PKU Medicine. He received warm responses at the meeting.

On the evening of December 20th, HAO Ping and his delegation also visited PKU alumni in Hong Kang. At the dawn of the New Year, he brought them the university’s greetings and best wishes, and invited them to come back to PKU to celebrate her 120th birthday next year.

During the visit, HAO Ping and his delegation also visited many friends and honorary trustees in Hong Kong including DONG Jianhua, LI Zhaoji, HUANG Zhixiang, CHEN Qizong. He introduced to them the status quo of Peking University and the development vision of "Double-First Class" Initiative. They all paid great attention to the construction and development of Peking University and expressed their desire to contribute to the university’s 120th Anniversary celebrations.